Since the day we made LaunchNotes generally available the #1 question we've gotten from customers is: "can users leave feedback?" Beginning today: they can!

We're stoked to share that our new Customer Feedback Manager is officially in beta.

A new channel for 1:1 customer communication

At LaunchNotes we're huge fans of driving increased customer engagement, and data tells us that personalized and contextual communication drives significantly higher engagement among users. Our new customer feedback functionality builds on announcements and roadmap items to provide a third, distinct, personalized channel for you to interact with and engage your customers. 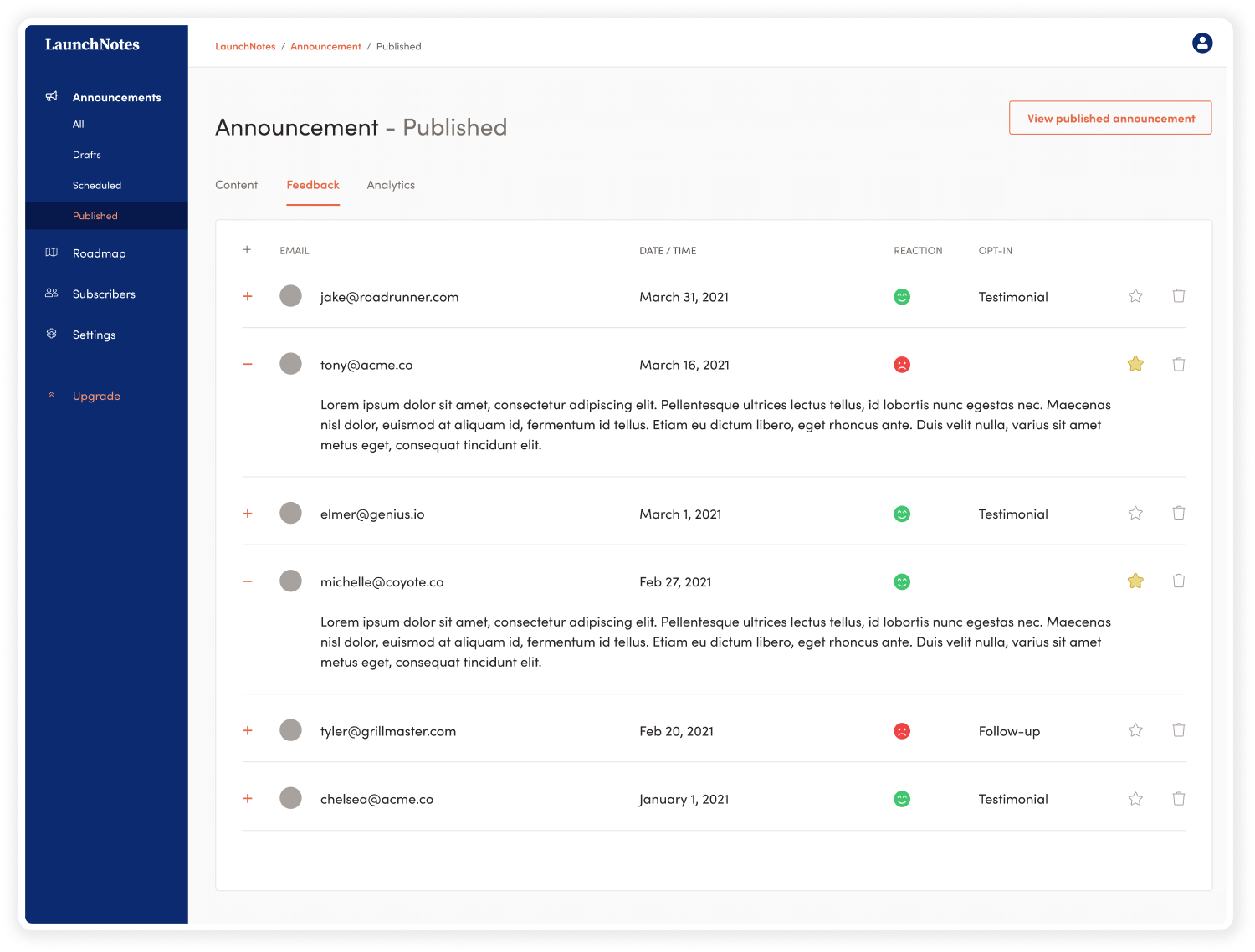 Customer feedback not only empowers you to ensure your users feel heard, but more importantly guarantees that you're building and delivering the features and functionality they're going to love.

Speaking of feedback, when researching this new feature we got some pretty direct feedback ourselves. It boiled down to: feedback shouldn't just be collected in one place (or at one time) during the product development lifecycle, but in as many places as possible. And so we built our new customer feedback in two flavors:

For product teams, one of the most valuable times to collect feedback is when you're going into planning cycles and trying to determine what to build next. This is the point where you're trying to figure out what work to prioritize, what will be in scope, and what won't. Prioritizing your investments is one of the most important jobs of any Product Manager. 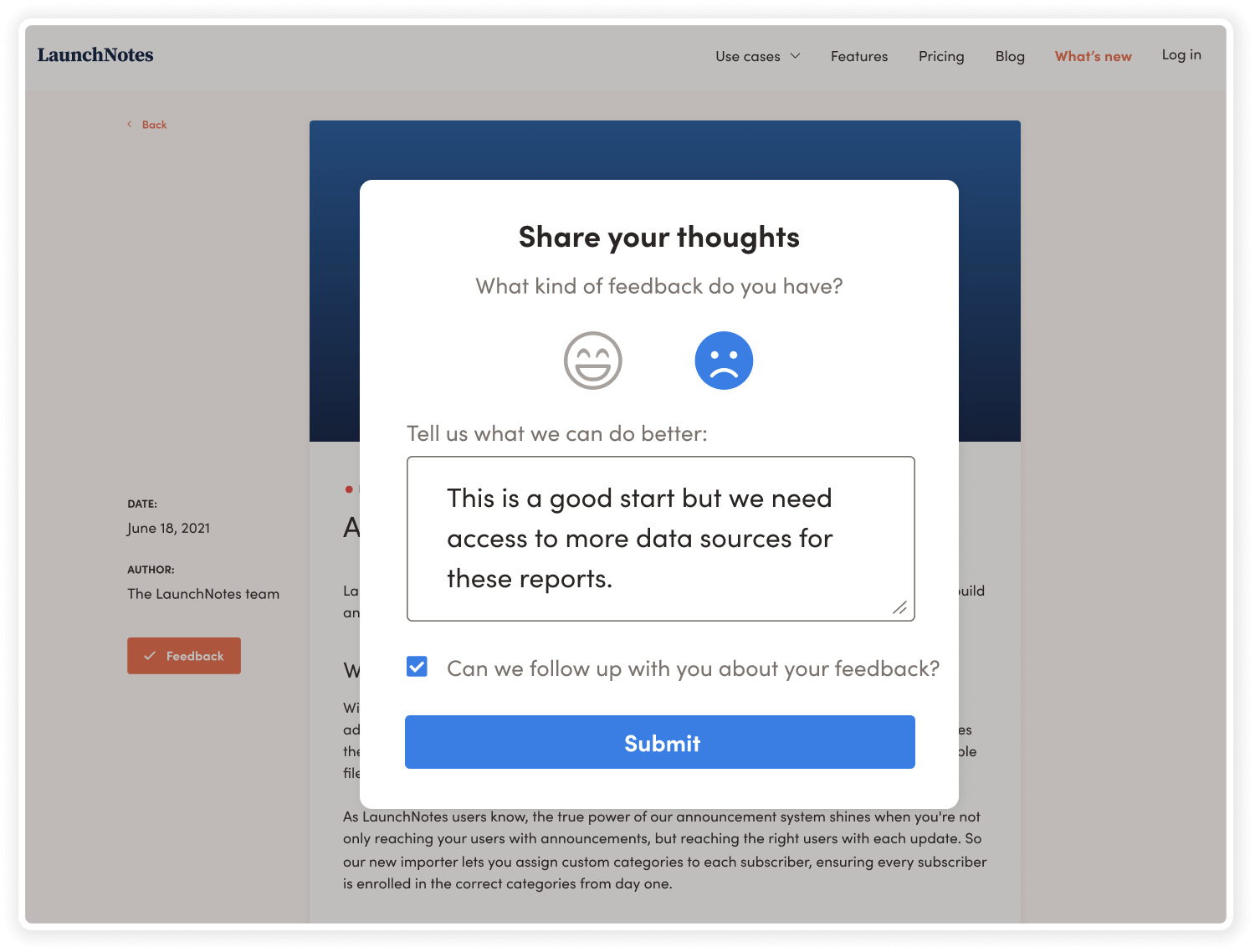 To help facilitate this process, our Customer Feedback Manager allows users to see which work items on your roadmap have received the most feedback, dig in to what that feedback is, and discover what your users are most excited about.

But I digress! The long and the short of it is that our new roadmap feedback ability unlocks countless new opportunities to ensure users feel heard and have a voice, while guiding your R&D team on where they should place their bets and what features and functionality will have the greatest ROI for the business.

But we listened when you said feedback is valuable in far more places than one, and the ability for customers to leave feedback on your roadmap is only half the story. 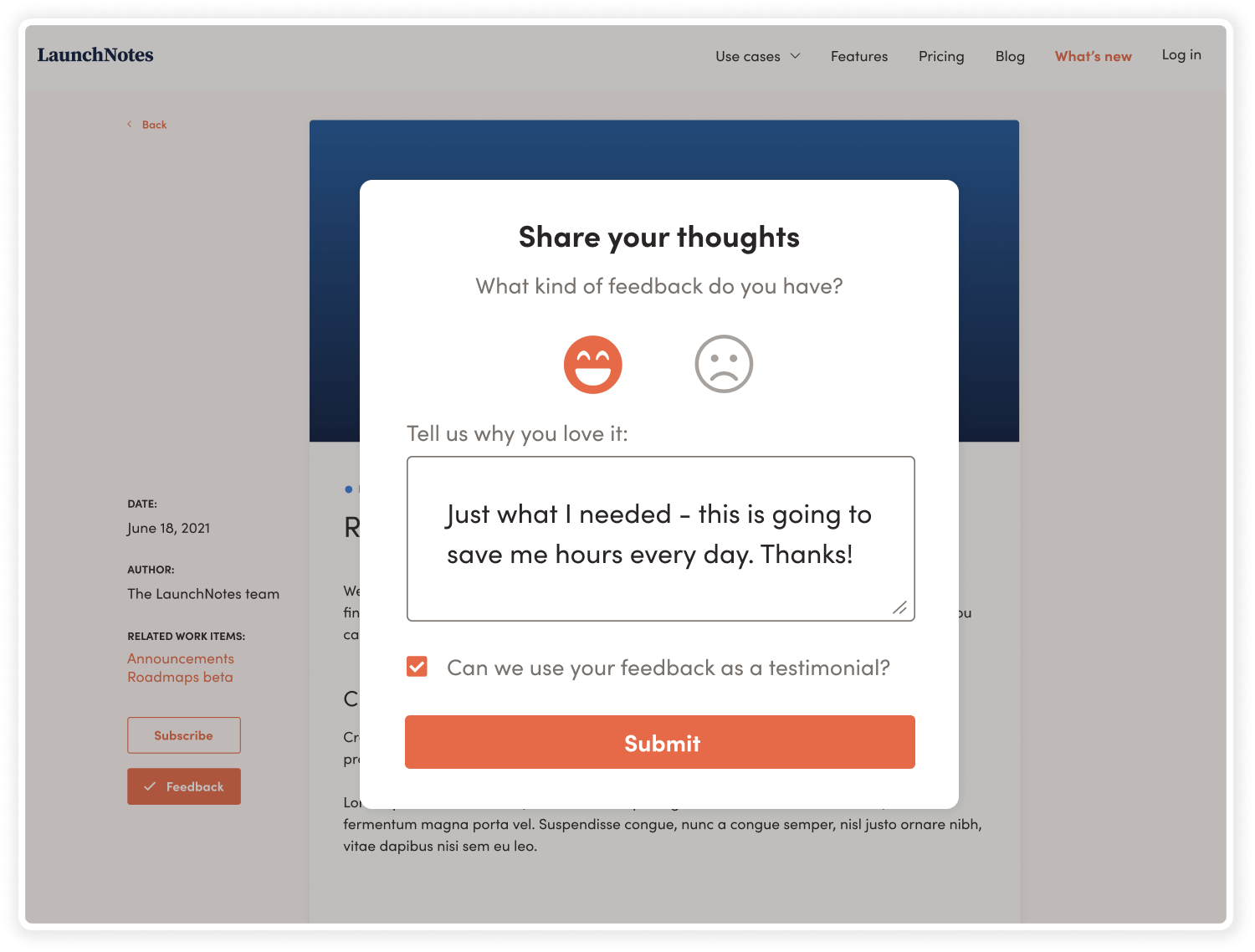 For most product marketing teams, feedback is equally valuable as/when they're rolling out new features and functionality. Getting feedback on specific announcements is an incredibly important and powerful indication of how users are reacting to what's just shipped, how it was positioned and marketed, and even if something about the launch was confusing and needs to be clarified. To solve this need, and serve these PMM teams, we're equally excited to unveil announcement feedback.

Now your users can engage directly with whatever you're announcing and provide contextual feedback for you and your team. Whether it's the killer feature that they've been waiting on and want to express their excitement, or if there's feedback from a power user who wished to see the new feature built in a slightly different way, users are often most animated around announcements, and our new Customer Feedback Manager allows you to capture that excitement. We ensure your users feel heard and your teams are empowered with 1:1 feedback at scale.

Your team will quickly and easily be able to measure the sentiment of customer feedback. When anyone leaves feedback they're asked to categorize their feedback as positive or negative. Then, on the back-end, your team can filter and sort the feedback based on whether it's excited or more... "constructive criticism".

These days privacy is top of mind for almost every software team. And while establishing strong privacy policies across your business is vitally important, it also means getting directly in touch with users can become a challenge. For this reason we built consent terms directly into our new feedback collector.

If users are leaving positive feedback, LaunchNotes will automatically ask them if whatever they're saying can be used in marketing materials and collateral. For PMMs who have always hunted for great quotes to include in their marketing collateral on launch day, this is the new, fast, automated way to collect those quotes ahead of time!

And when users have constructive criticism they wish to share, LaunchNotes will automatically ask them if it's okay to have a product manager (or someone else from your team) follow up to learn more about their complaint, request, and so on. This ability to quickly close the loop with customers not only offers a great opportunity to collect meaningful product feedback, but makes your users feel heard.

With our new customer feedback functionality, prioritizing your roadmap based on user feedback is a breeze. From within the internal roadmap view, PMs can easily see, at a glance, how many subscribers are subscribed to each roadmap item, as well as the amount of feedback that item has received. 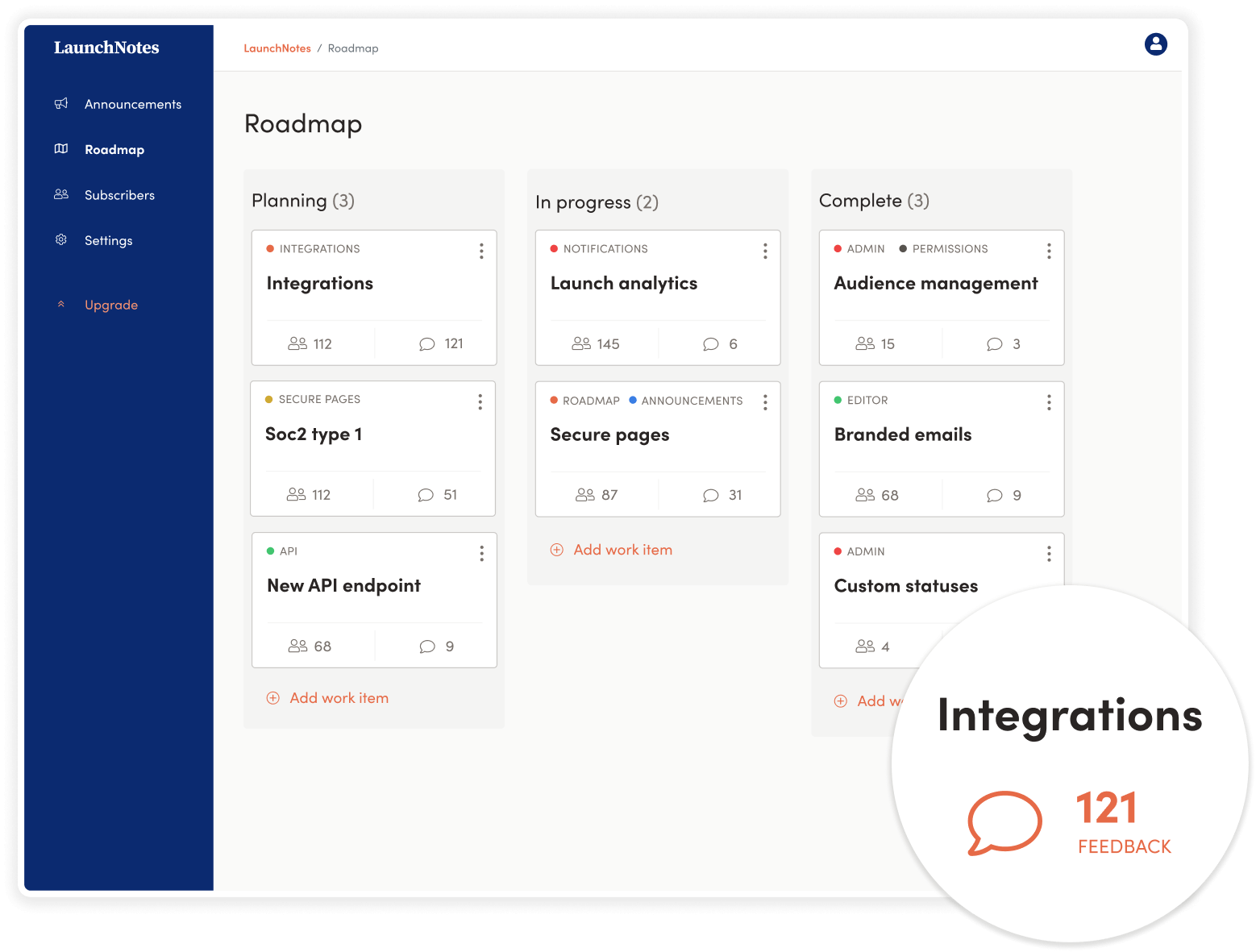 So if you're looking for a simple, streamlined way to ensure you're investing your valuable R&D resources where they count the most, look no further.

Enroll in the beta program

Are you as excited about our new customer feedback functionality as we are? Then we’d love to have you in our beta program!

To get going, leave some feedback on the Feedback V1 roadmap item and a member of the LaunchNotes team will be in touch.

Leave us some feedback 💡

Without being too meta, we'd also love to hear from you and gather feedback on our new Customer Feedback Manager!

Are we over the target? Did we miss the mark entirely? Is our beta version missing some key features? Drop some feedback in the "Leave feedback" button to the left. ⬅️

We look forward to hearing from you!

Thank you! Your submission has been received!
Oops! Something went wrong while submitting the form.